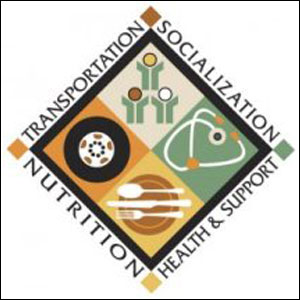 The first Senior Prom at the Estuary Council of Seniors was an elegant affair.

The first Senior Prom at the Estuary Council of Seniors was an elegant affair. The theme was portrayed in elegant colors of silver (grey tones and black) and white. A professional photographer complete with umbrella to shade the glare set up his equipment and began taking random portraits.

Nearly 100 attendees ran from their cars in the pouring, cold rain. Shedding their rain gear in the foyer they bundled together to find a table for groups of eight. The doors to the café were flanked with two groups of black and white balloons. As the doors opened, the Sandcastle Jazz band was ready to play. Director Stan, complete with black top hat, ushered the crowds inside and the women surveyed the attire of other women. Dresses always seem to be the subject women want to discuss…no matter the era.

A few wore long gowns, but most were dressy casual with sparkles. Everyone’s hair resembled ‘prom hair.’ No ponytails on prom night. A few tiaras lent a Hollywood flair. A couple of men wore suits and ties. There were no ‘promposals’ as is the style today.

At her table this reporter showed her old prom picture and asked others about their long-ago proms. The Irish couple and the two from England explained they didn’t have proms and this was their first. A few confided there was no money for nonsense in their day, and one said she had to help out at home. Nonetheless they had dressed in their finery on this night. I avoided any dress codes and came attired in my favorite role as reporter, black pants, white shirt, tie, and a hat adorned with my old Press Pass. One man asked if I was working for the New York Times.

The café was cleverly disguised and the transformation was well thought out. Appetizers, punch and wine were laid out on a side table. All food including the main meal of ziti and meatballs, salad, and rolls was donated by Luigi’s. As everyone filed in and out rooms A and B getting their food, the band played on. The room was filled with goodwill and surprised looks.

Clean up was smoothly accomplished with paper utensils. And dessert magically appeared on a far table. A man and woman in formal attire

approached the dance floor and demonstrated dances taught at the Fred Astaire Studio on Main Street.

The dance floor was opened to everyone and people slowly made their way to the area. The band got livelier and others joined the dancers. When a rock song began, my table grabbed husbands and made a circle in front of my table. They shouted, “Marji, Marji, Come On.” The steps they made didn’t seem too tricky and I went. I amazed myself, but the Estuary is my place of comfort and now fun.

Dessert was served and women collected ballots from the tables to select the King and Queen. The names were read and those with the loudest clapping from the audience won. Bingo Larry (Dourny) was elected King and Joyce Edgar Gagnon, the Queen. Crowns were set upon their heads and they danced together.

Stan gave an A plus as the score for the night. This means there will be another senior prom next year. The band played You Light Up My life and people began to call it a night. They tucked their ipads in their bags. We aren’t too old for new technology. Many were already sharing their pictures in the hall waiting to get their raincoats.